Get the size of Docker image without pulling image

Powered by Hugo with Dream Plus theme.

There are 20+ staffs in Salzburg office. Most of them are developers, one is administrator of office.
Generally the staffs in Salzburg work more flexible than the staffs working in Beijing.
Some of them live in German. Even though it’s not so far as Salzburg, they also need come to Salzburg by train. So sometimes they work at home, use internet and phone as communication tool.
And they have different responsibilities for products. For example, Helmut works on installer, Matthias and Michael are responsibility for QFT testing, Martin N. is focus on license API developing. So everybody has himself schedule, he can decide when he come to office and when leave office based on his working schedule. Nobody cares when you come/leave office or how long you work every day. I believe all of them do well on their jobs.
Furthermore you can work with your dogs together if nobody takes care of them at home. 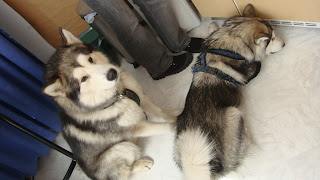 Most of foreign like coffee, so there is a kitchen with seats in the office. Some of them like to drink a cup of coffee or tea as a break, and it’s a good chance to talk with others. It’s a relaxing time for changing your mind out of work. Besides drinking some things, there is a room for playing table football game. It’s a small amount of exercise, it’s good for body. 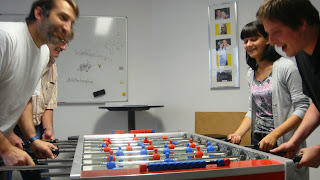 Another thing makes me very impressive is that the team is very stable than any company I know in China. Most of them work in company more than 10 years. So I think I know that’s why they know more than us. Everyone could be expert after doing the same thing more than 10 years. They love the work of coding, and they would like to do coding until retiring. That’s why I can see some of them are more than 40, even 50 years old.

Curious about me? Use the social links above to check out my profiles.